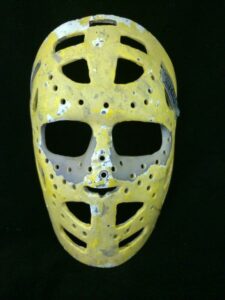 Gary Warwick of Port Huron MI has been making mask since 1968. Gary would make a mold of each goalies face and then hand lay up fiberglass with epoxy resin over the mold to make a custom fitting masks that would become his trademark. Only eight years later Gary had big time goalies from the NHL and World hockey league wearing his masks. Eddie Johnston and Yves Belanger of the St Louis Blues, Doug Grant and Bill Olichuck of the Colorado Rockies plus WHA goalies Mike Liut and Brian Cousneau wore Warwick Masks.

When superstar Goalie Rogie Vachon was acquired by the Detroit Red Wings from the L.A. Kings, Gary was called down to the Joe Louis Arena to make a mask for Rogie. The molded goalie mask was outlawed after the Philadelphia Flyer goalie Bernie Parent suffered a career ending eye injury in 1979 from an errant stick. The mask evolved into a hybrid of a baseball catcher’s wire mask and a molded fiberglass type.

Gary continued to experiment with different thicknesses of fiberglass and Kevlar with the intention of making the lightest and strongest mask on the market. In the late 70’s thru the 80’s the top mask makers were Greg Harrison of Toronto and Ernie Higgins of Boston. Gary’s mask always performed as good as or better than any mask on the market, but they became in high demand when he began building them out of carbon fiber and Kevlar with an epoxy resin. We continue to make changes of the make up of our mask to ensure the safety of our goalies.

Gary has trained his two sons in the fine art of Custom Goalie Mask Manufacturing. His oldest son, Gary Warwick Jr. has taken over the business when the Goalie Guru passed away in October 11, 2017.

Shelley Warwick, who does a little of everything in the office at Warwick Mask, works with many of our goalies who need custom coloring and sizing for Vaughn pads. Shelley will order any piece of equipment a goalie may need from Vaughn and get it to our customers faster than any other supplier.